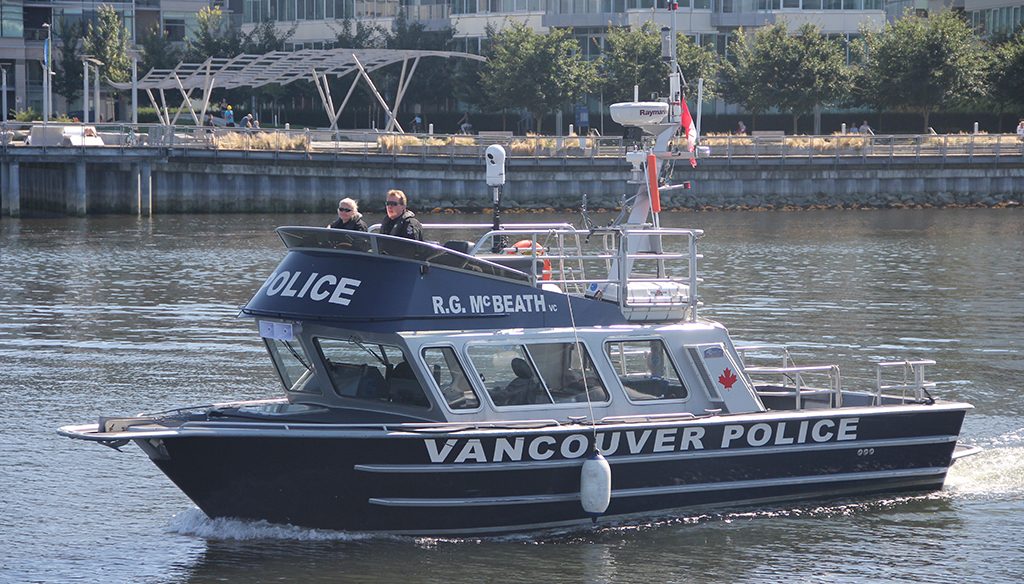 What speeding on the water can mean to you

We all know about pushing posted speed limits while driving cars.

Be honest – we believe that when we drive “just a little” over the speed limit, we will not attract police and it helps us get to our destination sooner.  But if we push the limits too far, our local law enforcement officials have some rather sophisticated methods of determining our travel speed and can deliver a citation that will result in a conviction.

Things are very different with boats.  Police boats are far and few between and when they do watch for speeders, they have problems reading radar guns on composite boats, making convictions difficult to obtain.  Furthermore, marine speed limit signs are inconsistent, making the regulations themselves confusing for boaters.  The result is predictable:  Some of the most sensitive shoreline geography and structures in our country are being shaken up with excessive wakes from passing boats.

Interestingly, this concern with boat wakes can be easily resolved.  But for boaters, it takes an understanding of the mechanics behind boat operation to be motivated to control wakes. In regards to law enforcement, they just don’t seem to know how best to regulate and enforce speed limits on water.  Finding a solution to this ongoing concern – that can work for boaters as well as regulators – may be as straight forward as both parties gaining insight into the basics of boat types and their operation.

Understanding your boat’s operation is key.  The two principle types of boats designs are planing hulls and displacement hulls. Planing hulls are able to go onto plane for added speed whereas displacement hulls can’t.  Boaters who own runabouts, cruisers and performance craft, which are planing hulls, understand that their faster speed is due to their ability to get up onto plane where they are riding up on top of the water as opposed to pushing it.  Their boat, with the help of a high power to weight ratio and ‘strakes’ in the hull, will push over top of its bow wave, and once planning, will operate on a reduced wetted surface. The reduction in friction with the water, results in an increase in speed. What planing hull owners may not recognize is that before their boat goes onto plane and is running very slowly, it is operating as a displacement hull. Only after power is applied to their boat does it transform itself into a planing hull vessel.

Using a 25’ boat as an example, the square root of its length is 5 and multiplied by 1.34 gives the boat a maximum speed of 6.7 knots.  (or 7.71 mph.)  Adding a more powerful outboard will not further increase this boats speed.  This same law of physics applies to your boat when it is acting as a displacement hull before going onto plane.

Power Up – Bow Up

We know that planing hulls, (runabouts, cruisers and performance craft), have a hull design and power configuration that allows them to transform into a planing hull when power is applied.  However, in the process of accomplishing this transformation, as power is applied, the bow must rise and the stern must drop.  Remembering that since your boat is a displacement hull until it is fully up on plane we can see that slightly pushing a speed limit and raising the bow to do so, shortens the waterline length of your boat.  Now applying the displacement hull speed rule, you are gaining very little speed, if any.  The only thing that is increasing dramatically is your fuel burn – and the size of the wake you leave behind.

Almost all outboards and stern drive powered boats have a throttle lever that controls engine speed. From the neutral position, the throttle when pushed forward goes into what we can call a forward gear “notch” position. This places the engine in gear with the engine running at a minimal power of around 600 to 800 RPM.  With your throttle in this ‘notch’ position your boat is in gear and ready to accelerate but operating as a displacement hull.  Only in this position can it be said that you are operating at idle speed. 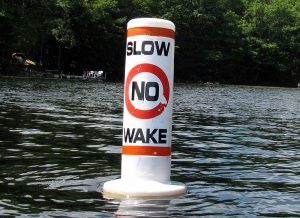 If a boater decides to push the speed limits a little, as he or she may do when driving a car, they are effectively beginning the process of bringing their boat onto plane.  Accordingly, the bow pushes a larger bow wave and the stern of the boat drops deeper into the water.  The net effect is that your boat at this slightly increased throttle speed is making the maximum possible wake it can produce at any speed.  A wake that is both larger and more destructive than when you are driving at cruise or even full speed.

It is quite easy to understand that the sequence of events that take place in the process of coming up onto plane should give law enforcement the clues needed to come up with an efficient and effective method of policing speed offenders.  Surprisingly, many enforcement officers that I have spoken with, claim that it is difficult to stop boaters from making large wakes.  In reality, a practical solution is only two steps away.

Slow Down – Bow Down

First, forget about posting various speed limit signage.  Two standard signs are all that is required for areas where wakes can be damaging. “Begin No Wake Zone” and “End of No Wake Zone”.  The second step for effective monitoring is even easier.  Any boat suspected of violating a no wake zone can be asked to stop.  If the bow of the suspect boat drops in the process of stopping – the boater is guilty.  A simple cell phone photo or two shot by the police would confirm the situation. This efficient method is used in most American States and works extremely well.

So, here is the bottom line to end wake worries:  As boaters, we need to be familiar with our boats and drive with courtesy.   The next time you are travelling through a speed zone, try pulling your throttle back to neutral.  If you see your bow drop, you are making too large a wake and burning too much fuel. Give shorelines and your wallet a break.

As for law enforcement, they should adopt no wake zones that can be simply patrolled.  Trying to determine if a boat is travelling a couple of miles per hour over a posted speed limit is immaterial, but a boat whose bow drops when it is stopped, is speeding. 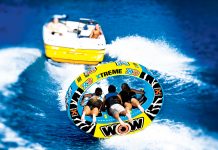 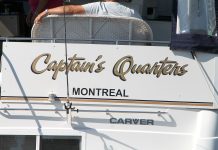