The following article is by Dusty Miller. It will appear in our upcoming Power Boating Canada Volume 35 Number 3. Want to subscribe for future issues? Click here!

Inboard/outboard engines can power a variety of vessels ranging from a 13-foot run-about to a 28-foot cuddy. They all, however, have one unique characteristic that can make handling tricky. Yet with a little patience and understanding of how they work, you’ll be able to manage your boat like a pro.

Most of a single I/O’s weight is at the stern, causing the bow to raise slightly out of the water. While you will achieve a higher top-end speed and greater fuel economy, the tradeoff is low-speed handling in confined quarters.

The slightest crosswind can easily misdirect your bow. The boat’s pivot point and power are also very close together, meaning you’ll need to apply a little finesse at the throttle to effectively control your boat. To begin, anticipate the wind and ensure the bow is pointing in your required direction before getting underway. I compare this process to driving a car on an ice rink. As long as you’re going in one direction, you’re fine; when you want to change direction, though, you can’t just turn the wheel. For a direction change, it’s necessary to first slow down – or practically stop – before the steering wheel has any effect. If you apply a little too much power with the wheel turned, you will be going for a very quick and startling ride.

Let’s say you want to exit a slip stern first, and your boat is secured on its portside. Check the ripples on the water to see which direction the wind is going at the end of the slip. If there is a crosswind, it will blow on your starboard when you first exit. Before you actually back out, then, point the stern away from the dock toward the wind. You should also be sure your portside fenders are well placed. In addition, consider putting an extra one toward the bow since it will be turned toward the dock.

To get underway, turn the wheel toward the dock (to port) and touch the throttle into forward. I call this “touch in – touch out”. You want the boat to turn without actually getting underway, so put the boat in gear long enough for the prop to make just a few revolutions, and then go back to neutral. The stern will begin swinging away from the dock. You may need to “touch in – touch out” a few times.

When the stern is off the dock, turn the wheel away from it (to starboard) and put the shifter in reverse. One of the most important things about low-speed handling with a single I/O – or with any boat, for that matter – is that you must have the shifter in neutral when turning the wheel past the centre point. Think of this process, in other words, as from port to starboard or vice versa. Otherwise, the boat could swing dramatically, and you’ll probably have difficulty keeping it under control. Neutral isn’t necessary if you’re only making slight adjustments. Going slow, however, is key. With the helm to starboard and the engine now in reverse, continue pulling away from dock. When you’re about midway, and as you clear the slip, slowly straighten the wheel.

If the crosswind blows you off course when heading down a narrow slipway, you may lack room to correct your heading by simply turning the wheel. In this event, put gearshift to neutral, turn the wheel to starboard, and put the shifter into reverse. You will then swing the bow to port.

Let’s look at a final position that might frustrate single I/O boaters. When on a lea shore, the wind may hold you against the dock. In this case, it’s particularly important to aim the vessel before getting underway. If you attempt going straightforward or astern – even with the wheel turned away from the dock – the wind will hold you there. Your fenders will roll up, and your bare hull will scrape along the dock.

To go out bow first and with your portside against the dock, ensure your fenders are properly placed to protect the boat. In particular, check near the swim platform or transom. Next, turn the wheel toward the dock and “touch in – touch out” the shifter into reverse. The stern will pivot toward the dock, and the bow will swing out. Note that this strategy may not work in a strong wind. Rather, you may need to take a line from your stern cleat closest to the dock, loop it around the cleat on the dock, and bring it back to your stern cleat. Now turn the wheel away from the dock and engage the shifter in forward – “touch in – touch out” – and the vessel will pivot away from the dock. Watch your swim platform. If it begins to strain against the dock, loosen the stern line to give it room and doublecheck your fender. When the bow has turned away from the dock, quickly let go of the stern line and, with the wheel straight, get underway forward.

You must be quick about this process since a single I/O tends to swing in dramatic fashion. Following these steps may sound tricky at first but, once you get the hang of it all, you can safely keep your vessel under control. 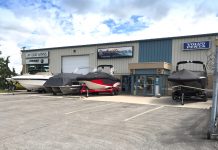 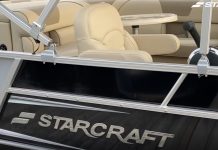 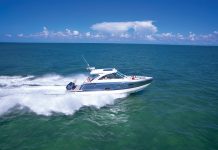