What your sonar is really telling you!

The sonar is without a doubt the most precise tool for the fisherman and manufacturers are recommending sonars with optimal performance. Most users hope to see fish on the small screen. However, there is much more to see.

All units are designed to locate fish, structure and depth which was revealed by an inventive genius by the name of Paul Langevin. In 1915, this French physician developed the first sonar that can detect the presence of submarines and icebergs.

The first transducers featuring quartz ultrasound technology were tested in 1917 by the Canadian Robert William. During the Second World War, many destroyers and rescuers had onboard what the English called A.S.D.I.C.S. (Anti-Submarine Detection Investigation Committee) and what Americans referred to as SONAR (SOund NAvigation and Ranging).

The first version destined for the world of fishing was the “Little Green Box” from Lowrance which first appeared on the market back in 1959.  It was a unit featuring a lighted beam. Several years later in 1965, this same company developed a unit that would operate at high speed movements.

Then, the appearance of fully-sealed Hummingbird Super Sixty units appeared on the market back in 1975. We had to wait another decade before witnessing a huge leap in technology when liquid crystal display (LCD Liquid Crystal Display) was introduced.

Over the years, we could witness some interesting developments such as 3D Technology. What became incredibly noteworthy was the integration of a navigational aid backed up by the Loran-C in 1988 followed by the famous GPS in 2002 which literally revolutionised the fishing and navigational world.

Other significant technological breakthroughs include ClearVü. It gives you a wide photographic image view under the boat. With this technology, you can clearly see structure, submerged objects and fish. Much like ClearVü, SideVü is a high-frequency sonar that gives a clear image of fish or structure that are located on the sides of the boat. This true-to-life picture of what’s below the water’s surface helps identify the most ideal spots and structures for fishing. With noise suppression providing for an ultra-crisp high-resolution image, it’s easy to see where the best place to fish will be.

After this, Chirp made its appearance on the market and it changed everything. It is the most sophisticated sonar technology available for use by fishing and boating enthusiasts. The word itself is an acronym for Compressed High-Intensity Radiated Pulse. To give you an idea, standard sonar sends one single frequency at a time. Since the only feedback is from this one single frequency, there’s little information to work with, limiting the clarity and resolution available with standard sonar. Instead of sending just one single frequency, Chirp sends a continuous sweep of frequencies ranging from low to high. Chirp sonar technology then interprets frequencies individually upon their return. Since this continuous sweep of frequencies provides Chirp with a much wider range of information, Chirp sonar can create a much clearer, higher resolution image.

And now the latest sensation from Garmin is called Panoptix. This all-seeing sonar is unlike anything you’ve ever seen on the water. It gives you the ability to see all around your boat in real time and in 3 dimensions. Whether cruising or fishing, Panoptix transducers are available in Forward and Down configurations with mounting styles to suit your boating needs. The most amazing sonar technology ever, the Panoptix LiveScope, is live, real-time scanning sonar. You can actually see easy-to-interpret live scanning sonar images of fish swimming near clearly defined structure. You can even see your lure as you retrieve it. And your boat doesn’t need to be moving. These images are so clear and precise that with a little practice, you might be able to distinguish between species of fish!

The next three images obtained from a Garmin GPSMAP 7608XSV will give you a good idea of the types of results we can obtain with modern fishing sonars.

One of my preferred techniques for fishing deep bottom lakers is once I’ve located a trout close to bottom, I will drop my offering until the tension on the line releases then I start jigging. However, when lake trout are in deep water, between two water columns, this is a completely different story. I will guide you on what’s happening if you look at the photos on the bottom. Letters will guide you step by step. 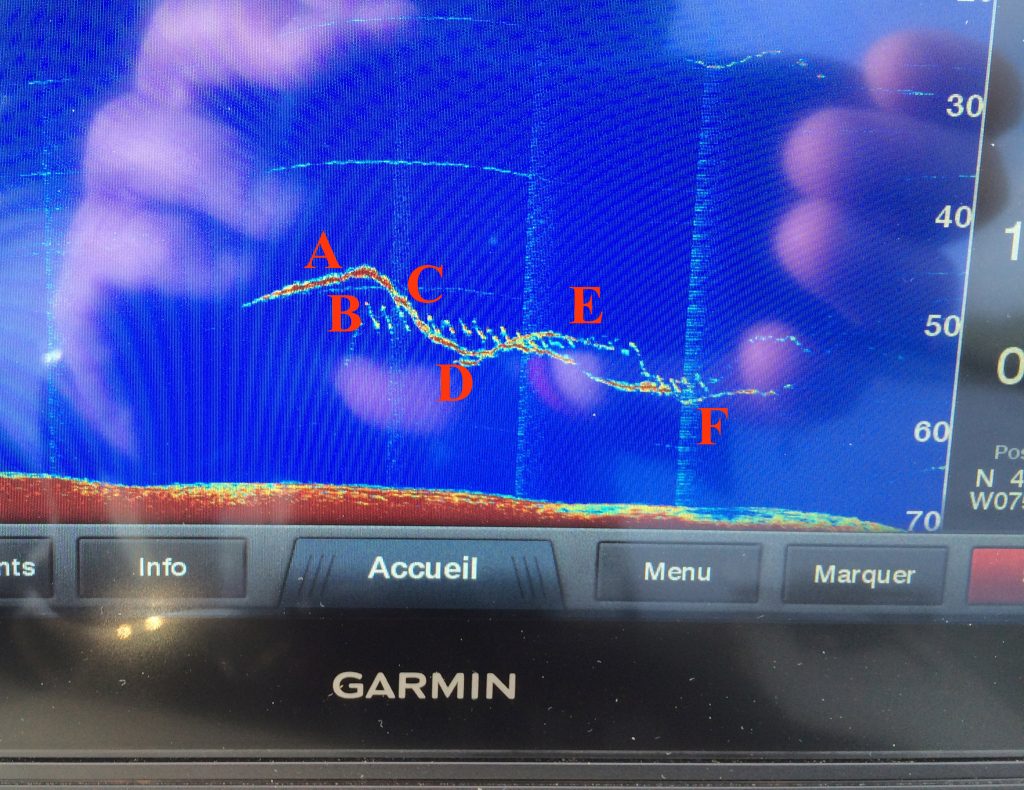 Equipped with this new technology, you will see way more fish in the water column. Just like a DIY project, you need the right tool for the right job. 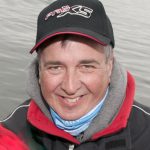 Patrick Campeau is a professional fisherman that is a three-time provincial champion member inducted into the Canadian Pantheon of Fishing.

Find out more about Patrick Campeau at www.pcampeau.com or www.facebook.com/lapassiondepatrickcampeau 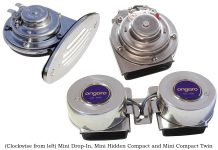 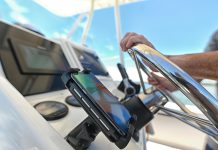 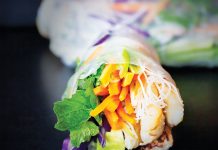