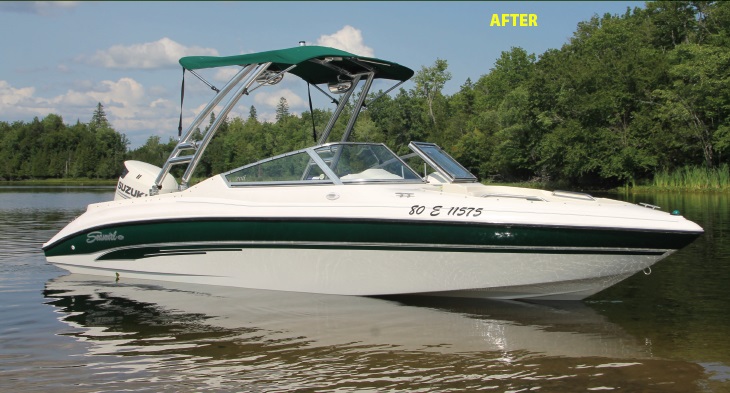 In the previous five installments in this DIY series about How To Update the Family Bowrider, we outlined the rationale behind the project (see PBC 32-4), we replaced the old two-stroke outboard with a new four-stroke (see PBC 32-5); we added a watersports tow tower (see PBC 33-1), sourced an appropriately sized used boat trailer (see PBC 33-2), and replaced the radio, speakers and fishfinder (see PBC 33-3). In this final installment we upgrade the canvas and put a unique long-lasting protective coating on the fiberglass on our project boat – a 1998 SeaSwirl 208 21’ bowrider.

When we found it two summers ago, our project boat had lived for eighteen years inside a boathouse on a marine railway lift. Everything on the boat was original, so over the past few columns we’ve upgraded and improved thing to make this old boat look more modern.  Now it was time to address the last two items: the original canvas and the fiberglass that as far as we could tell had never received a coat of wax.

When you purchase a boat new, often it will come with options for how you want the canvas laid out: full cover, camper back, tonneau cover etc.  The more canvas there is on a boat the more work it is to take down and put up.  Our project boat had a full top that started at the windshield and went up onto two aluminum arches (that were not high enough to stand under), to about the midway point of the cockpit, and then another huge piece of canvas sloped down to the transom. Two small triangles of clear window vinyl filled in the sides above the side windows. A separate smaller piece covered the bow seating area. In total there were six zippers and a ton of snaps that had to be assembled in a certain order or it wouldn’t fit.  It simply took too long to put up and down, and while it was in good shape, it wasn’t waterproof. Our boat’s new home would find it in the water tied to the dock for six months of the year so we needed to keep it dry inside to prevent rotting.

We had already installed the Monster Tower with its’ own overhead bimini top, and we mounted the plates to the top of the gunwales. The new cover would have to be custom designed to go around the uprights easily and keep the water out.  To make installation and removal as easy as possible, we opted to get a single tonneau cover.  I reached out to Black Rock Stitching, and Rene Sonnenschein for a solution.  Rene is based out of the Parry Sound area, and after a conversation and sending him over a couple of photos, we towed our boat over to his shop. “Canvas work can be done remotely, but for custom work that fits tightly around everything the way that it should, it’s best to have the boat there as you sew it,” Rene said.  Having seen his photo album of other work he’d done in the past, and received great reviews from other customers who highly recommended him, we booked the job for his next available time. (My recommendation: use a local canvas guy, check out photos or examples of their past work, and ask for recommendations.  They are all busy – don’t expect immediate service.  If you can, do your canvas work in the off-season.)

We dropped the boat off again, and a week later the job was done.  Rene custom designed a tonneau cover that sloped down from the windshield to the transom and neatly fit around the Monster Tower with four inch “boots” to keep the water from running down inside the boat.  It had a single adjustable post inside to keep the canvas from bellying.  (Rene doesn’t recommend suspending the canvas from above because it always rips out.)  He added a single pole to the original bow canvas to prevent it bellying, and resprayed it with 303 Fabric Guard to make it waterproof again. It’s been a full season now since this work was done, the cover is quick and easy to put on and off, the boat stays dry inside and we couldn’t be happier.

When it was first introduced, fiberglass was touted to be the fix-all and maintenance-free solution to the dreaded annual maintenance that wooden boats required.  Boat owners however quickly learned that it required at least a little maintenance to prevent the fiberglass finish from oxidizing and eventually becoming chalky.

While our project boat had lived in a boathouse, unexposed to the elements, I don’t think it had ever been waxed. When we washed it for the first time, I noticed the fiberglass finish was in great shape but lacked a shine, and the water didn’t bead up.  Traditionally, the way to bring back a dull fiberglass finish is a three step process combination of rubbing compound, polish and wax.  Each step is applied either by hand or with a power buffer, and it’s a labour intensive process. The waxing step needs to be repeated at least annually, the compound and polish steps every three to five years, depending on the exposure to sun and the elements that your boat gets.  Alternatively, you can pay someone to do this work, but at a cost that’s not easy on the pocketbook.

I ran into a company called Provive at the Orillia In-Water Boat Show last summer, they were there exhibiting a process I’d never seen before.  On the transom of their show boat – a 1997 Sunseeker express cruiser – were two display boards showing a “before and after” version of a variety of materials: wood, brick, metal and fiberglass.  The “before” pieces looked weathered, worn and exposed, while the “after” pieces looked brand new.  Striking up a conversation, I was invited on board to learn more.

Jeff Windich, Provive’s Director of Services, explained to me that Provive isn’t a wax that wears off in a short period of time, usually in less than a year. Provive isn’t a sealant either that eventually flakes or peels off like old paint. Rather, it’s a proprietary veneer – think of it as a clear coating.  A coating that has been used for over a decade in commercial real estate to treat the outside of buildings to reduce maintenance costs. A coating that’s been used by cities and municipalities in public places (like subways, buses and public washrooms) to reduced vandalism and cleaning costs. Those two industries account for about eighty percent of Provive’s business, and they have recently expanded their marketing efforts to serve the marine industry.  “The Provive system brings back gel coat colours, makes white gel coat brighter, and permanently protects your boat from further fading and staining through the use of our proprietary permanent clear veneer that is guaranteed to last 5 years or more,” boasted Jeff proudly.  Chris Yardley, V.P. Sales and Marketing added, “it’s important to note that although Provive has the appearance of being a veneer, unlike traditional veneers that boaters may have experienced before, our product actually penetrates the gelcoat, making it part of the surface rather than simply sitting on top. This is how we get the longevity never before seen in the boating market.”

Digging deeper, I asked Jeff to show me.  He pointed to the yacht we were on – a 50 foot Sunseeker that was about 20 years old but looked brand-spanking showroom-floor new.  Jeff poured red wine on the floor (something that would make most boaters cringe because the porous fiberglass would absorb at least some of the colour).  Then he wiped it up with just a towel – no stain, no trace.  He took a permanent black marker and scribbled on the outside of the hull (something that a grandchild could potentially do), and again wiped it off without a trace with just a towel.  I couldn’t believe it – I looked closer and there was no residue – it was as if it never happened.

So, I challenged Jeff to make our project boat look brand new after 20 years of neglect.  I dropped off the boat last fall. It had been outside for two summers, sitting in our tea-coloured lake tied to the dock, and stored under a tarp leaving the hull exposed for one winter.  Check out the before photos: the hull was stained, the green stripe had a white haze, and the white gel coat on the deck was chalky to the touch.

Two weeks later, I dropped back to the Provive shop and picked up a brand new boat!! I kid you not, the stains were gone, the green stripe was showroom new, and I could see my reflection in the deck.  The ultimate test however would come 8 months later – this past week – just before we went to press with this issue – my wife cleaned the boat for the first time this season.  It had sat out all winter under a tarp at our cottage (the hull exposed on the trailer), and I hadn’t had time to wash it since it was launched in mid-May.  She took the Provive towel, wet it down and wiped off the entire boat.  “Everything came off so easily! The black streaks from the rain, the pollen, the spider poop – it all just wiped off. I was done in 15 minutes!,” she told me very excitedly.  Now she’s asking if we can get the Provive system done to the big boat we are searching for to take us around Great Circle in a few years.  You can request a quote on getting your boat “Provived” here: https://provive.ca/boats/#quote

We took a twenty year old bowrider, that admittedly needed a facelift, bought it for less than $10,000, updated the outboard to a 150hp Suzuki four-stroke, added a Monster Tower and bimini, updated the electronics with a Fusion AM/FM Bluetooth stereo, amplifier and system matched speakers and a Lowrance HDS12 fishfinder/plotter, replaced the old canvas and protected the fiberglass with Provive, making the boat look and perform like brand new.  The project took over a year (we could have stretched it a little longer but for editorial reasons we moved quickly), and we now have a 21 foot family bowrider and entry-level watersports tow boat that will last us for perhaps another 20 years.  It’s an environmental way to give your favourite family boat a new lease on life, and extend your boating memories for decades to come.

If you missed an issue of this six-part DIY project, you can read the full series on our website at www.powerboating.com.